The Green Party have selected rugby league international Ross Peltier to be their candidate in the Batley and Spen by-election to be held on 1 July. 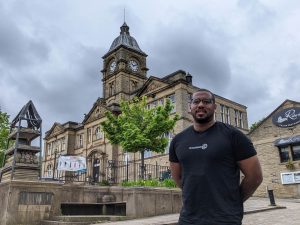 Peltier, a Jamaica rugby league international who also plays for Doncaster Dons, lives with his partner and young children in the constituency. He also works in the building sector and has a strong interest in sustainable construction.

On his selection by North Kirklees Green Party, Peltier said,

“From a young age I have been raised to have a passion for your local community, to give to and help others to create a better place for us all to live in.

“I gained this passion through my parents and how active they have been in communities within Kirklees and the West Yorkshire area. I was immersed in such events, meeting with community groups and really begun to understand that the diversity and strength in character is one of the major things that makes our region so special.

“I moved to the Cleckheaton area to raise my young family a number of years ago and loved the area since day one. As a working-class man who lives in the area in a humble terrace house, I feel I am like everyone else in the area and a relatable to them.

“I feel I am in tune with the attitudes, needs and wants from the area through living and working shoulder to shoulder with everyday people within the community.

“As a professional rugby league player I have a profile of sorts in an area which holds rugby league as its beating heart. I feel I can bridge the gap with the working person who has been a single party voter all his life to the Green Party. “

Councillor Andrew Cooper, who leads the Greens on Kirklees Council of which Batley and Spen Constituency is a part, said:

“Ross is exactly the sort of candidate who can gain new Green votes in Batley and Spen and capture the imagination of local people.

“He really is a local boy and a role model for so many. He has a passion for our area and as a Green MP would not have party bosses telling him how to vote. He really would be free to represent Batley and Spen without the rules binding MPs from the 2 larger parties.

“By-elections are different to general elections. People won’t change the government but they do have the opportunity to send a strong message about what they think is important and the sort of person they want to represent them.

"We are keen to win every vote we can in this election and we will be working right the way through until polling day.”