The Green Party has criticised Doncaster Council for the timing of the controversial decision to fell ‘healthy and mature lime trees’ on Middlefield Road in Bessacarr. 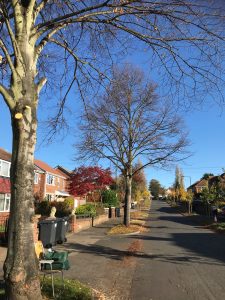 Kate Needham, a Green Party campaigner has said, “This is not only bad for our environment, but offers poor value for money for taxpayers here in Doncaster.

“Doncaster Council is already struggling financially to deal with deal with huge problems such as bailing out the firm that run Doncaster markets as well as the financial problems being caused by the ongoing battle with covid-19.

“It makes no sense that they have decided that now is the time they choose to revisit felling beautiful, healthy and mature lime trees on Middlefield Road.”

Fiona Cahill, another Green Party activists said, “The residents living on Middlefield Road we spoke to who were alarmed by the ‘so-called consultation’ were already well informed that felling is not the best or most economical way to deal with the damage that tree roots can cause to pavements.”

“It’s worth remembering that newly planted saplings cannot replace mature canopy cover so we are calling on the council to keep the existing tree cover and instead repair the pavements.”

Paul Powlesland, founder of Lawyers For Nature offered his opinion “When I wrote my advice in January, felling the trees without a license from the Forestry Commission was of dubious legality.

“It appears that little has changed since then, except the desire from the council to give it another go. It is frustrating that the lessons from Sheffield that it can be cheap and easy to fix pavements and retain street trees have not been learned.

“It is to be hoped that local people will take peaceful protest action to retain these beautiful trees that cannot be properly replaced.”