Tree campaigners accuse Councillor Joe Blackham of misleading the public following statement yesterday regarding the felling of trees on Middlefield Road, in Bessacarr. 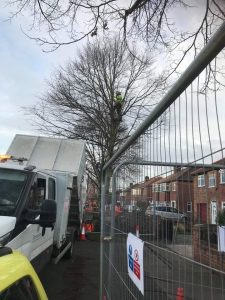 So far, 60 healthy street trees along the road have been felled with only four remaining.

Campaigners have said they would continue to peacefully protest and adhere to Covid-19 guidelines.

Councillor Douglas Johnson, the leader of the Green Party group on Sheffield Council made enquiries following the claims made by Councillor Blackham in the Doncaster Free Press:

"Dave Dillner told me that he had two meetings last year with senior officers at Doncaster in Waterdale. I l told them in no uncertain terms how wrong their actions were.

“Not a single one of those trees needed to be removed. We are appalled at what they've done, especially given the assurances they gave Dave during our second meeting. It's Sheffield...in Spades!"

A report by the local government ombudsman said it acted with a "lack of transparency, openness and, on occasion, honesty.”

Tony Nicholson, one of the protestors and a Green Party spokesperson said,

“It really is like Doncaster Council looked at the appalling behaviour by Sheffield Council and are deliberately setting to one up them.

“They are not engaging with our concerns, they are not reaching out to talk, they are making statements to the media which how no bearing on reality.

“At a time when public trust in politicians is so low it is beyond belief that the Labour administration in Doncaster is showing so much contempt for local residents and the general public.”