The Green Party has become the first national party to announce its candidate for the 2021 West Yorkshire Mayoral elections – and in what is thought to be a first, will run on a double ticket for both Mayor and Deputy Mayor. 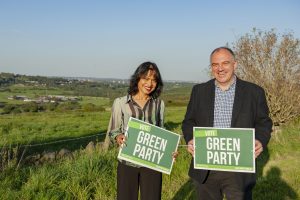 Andrew Cooper, the leader of the Green Group on Kirklees Council was selected as the candidate following an internal poll of members with 58% of the vote.

In what is thought to be a first for a metro mayor election, Councillor Cooper has asked runner-up Hawarun Hussain, a former Deputy Lord Mayor from Bradford to be the Green Party nominee for Deputy Mayor and his running mate.

Councillor Cooper has said, “I am delighted to have been selected by Green Party members in our region to be the candidate in next year’s mayoral elections.

“The Greens want to see more democracy and more decisions made in our region but the government in Westminster has forced this flawed mayoral system without offering us the option of a Regional Assembly elected by Proportional Representation.

“I have asked Hawarun to be my running mate so the voters in our region know who they are going to get. All too often metro mayors simply appoint one of their cronies to the position.”

The Deputy Mayor for Greater Manchester, Beverley Hughes, a former Labour MP receives a salary of £77,000 a year after being appointed by Mayor Andy Burnham.

Hawarun Hussain said: “Climate change is on the public agenda like never before. Last year, it was reported that a majority of the public now recognise the climate crisis as an “emergency” and say politicians from the mainstream parties are failing to tackle the problem.

“Andrew and I will show that that the Green Party offer a genuine alternative to the same old politics of the other parties.

Councillor Cooper and Ms Hussain launched their bid in the Tong and Fulneck Valley between Leeds and Bradford where Bradford Council is planning to spend £64m of money from the West Yorkshire Combined Authority to build a link road through one of the last areas of greenbelt between the two cities.

Councillor Cooper added, “Communities like those in the south of Bradford have been let down by a system where decisions are being made with no regards for the people living there.

“Of the £875m transport fund for the West Yorkshire Combined Authority, a whopping £660m is allocated to road building programmes compared to only £20m on building railway stations.

“If we want to tackle the climate crisis, we need to do things differently – especially when it comes to transport. Far from trying to address these problems, our Labour-run councils and WYCA are still obsessed with building new roads.”

Published and promoted by Chris Rose on behalf of the Green Party, both at The Biscuit Factory, Unit 215 J Block, 100 Clements Road, London, SE16 4DG.